At Dog Comm we work with lots of dogs with aggression issues, 500+ dogs in the last 5 years and most of these dogs bark and lunge at or would bite people or other dogs (sometimes people AND dogs if they’re really unlucky!). Not one of these dogs would be subjected to aversives by us. By aversive we mean something that is designed to startle, cause pain or fear in order to decrease an unwanted behaviour. We don’t mean to sound smug about not using aversives, we, like many other people, did use them many years ago but we stopped and let us tell you why we stopped using them.

People who use aversives will often justify them and say that their use ‘saves the lives of dogs that would be otherwise put to sleep’, we would disagree as in our experience they normally make an already aggressive dog unpredictable. You may manage to suppress their aggressive behaviours for a while, it might be for days or even months but normally, eventually, the reactivity returns. The reason why 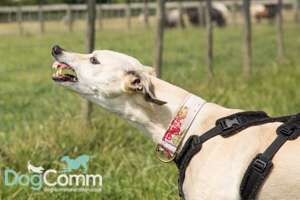 the aggression returns is that most dogs that show aggressive behaviours are inherently anxious and you haven’t made them feel any better about the thing (people/dogs) that scares them- you’ve just taught them that communicating that they are scared (by barking and lunging) isn’t allowed as they get ‘punished’ for it- by a squirt of water in the face, by a puff of citronella or by a noise that startles them. That’s no way to make a better emotional response to things that scare you.

Using aversives can also cause an aggressive reaction towards whatever the dog perceives has caused the punishment and that can bring a whole host of problems that you don’t want to get into.

Believe me when I say that we can tell (even if people don’t admit it to us straight away!) if dogs have previously been trained using aversives, we can often tell from their responses to other dogs (or people) and by their anxiety about communicating around them. These are often the dogs that wouldn’t bark or lunge at another dog- as they may have cut out that communication as they got punished for it in the past. They are often the dogs that would react unpredictably and explosively if they found themselves in close proximity to the thing that scares them. They’re also often dogs that show anxiety around their handlers.

Another justification for aversives is that ‘reward-based training doesn’t work for all dogs’. That’s just not true, and that’s not just our opinion as there’s an awful lot of research that says it does work as that’s exactly how dogs learn. If positive reinforcement hasn’t worked for dogs in the past then it may mean that it hasn’t been done correctly- working with aggression issues takes experience, really good training skills and an understanding of the science behind it all. It’s never as simple as clicking and chucking a few treats around.

If reward-based training has been implemented properly and progress has been poor then we would want to revisit an underlying medical cause. All dogs we see are under veterinary referral as its so important to rule out medical causes for aggression as there are many medical causes. Anyone working with dogs that show aggressive behaviours should insist that thorough and exhaustive medical checks have been done-that’s not just a quick annual health check, it will often involve full bloods etc. Many dogs that will have been subjected to aversives as ‘reward-based training didn’t work for them’ may have been unwell or in pain. 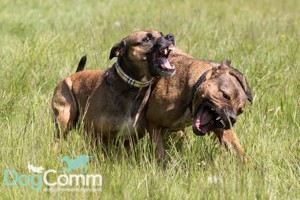 What we don’t promise are quick fixes, if you have a dog that has bitten repeatedly or has spent years barking or lunging then you can expect to be spending quite a bit of time with us over the next few months, at the farm and eventually in more real-life situations while we help you rehabilitate your dog. There are no magical solutions or fairy dust that can ‘cure’ aggression (we wish there was!), it takes time as we are teaching dogs to make different associations and responses to things that they are reactive to- we are changing their emotional response, something that can’t happen instantaneously. But it can happen and we can make real and often dramatic changes if we all work together.

It’s just common sense isn’t it really, you can’t cure anxiety (and remember that is the root cause of almost all aggression) by using something that causes fear or pain. It’s never just an interrupter, you’ll often hear aversives called interrupters- it only works as it’s sufficiently unpleasant that the dog doesn’t want to experience it again.

Why choose to train using fear and punishment when there is another way?

Laura is a Full member of the Association of Pet Behaviour Counsellors & an ABTC registered Clinical Animal Behaviourist.

Keep up to date!

Keep Up To Date with our seminars and workshops.

You may unsubscribe yourself at any time.